Sierra Leone Qualified For African Cup of Nations After 26 years 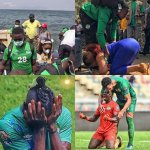 DID YOU KNOW: Sierra Leone had not played in the African Cup of Nations since 1996. It took them 26 years to qualify for the tournament again. Their fans said goodbye with kisses on their feet and arrived in Cameroon in boats, given the few resources that their federation has to pay for flights. Thus, they traveled more than 2,000 kilometers. Today, in its debut, its players could not avoid the tears of emotion after hearing its anthem. They drew 0-0 with the reigning champion and great favorite, Algeria. And they celebrated it as if they had won. The team was ranked 108th in the FIFA Ranking together with a rival that has not lost 35 matches.