Mr Stimler, himself a subject of a related graft case being heard in the U.S., has named seven other accomplices, four of whom are four Glencore traders who partook in making bribe payment, and a prominent oil trader from Africa, whose involvement in the bribery conspiracy predates Mr Stimler’s, reaching back to the 1990s.

Court papers seen by BNNBloomberg noted Mr Stimler and the unnamed seven used “inflated and fraudulent invoices” to “disguise the nature and purpose of bribe payments made to government officials.”

“When I made requests for payments to intermediaries, I was aware that other Glencore traders who worked with me were doing the same thing by directing our intermediaries to make bribe payments to government officials,” Mr Stimler said to a New York federal judge.

“I intended that a proportion of the payment to intermediaries operating in Nigeria were to be passed on to Nigerian state-owned oil company officials. The purpose of the payment was to influence those officials’ decisions regarding the Nigerian government’s allocations of crude oil cargo.”

“Your honor, I knew what I was doing was wrong and unlawful. I’m extremely remorseful for my conduct.”

Mr Stimler, 49, admitted bribery and connivance to launder money in July, the first time a Glencore trader would make a confession to such malfeasance. 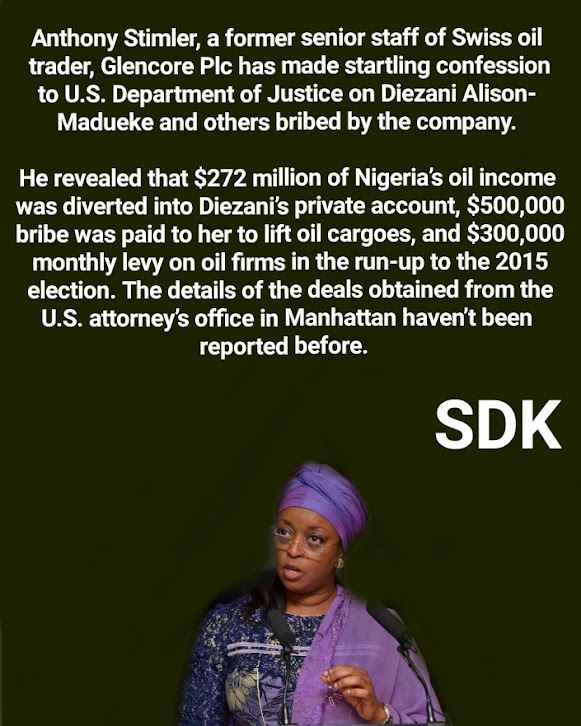 With about 23 years on the job, he became the chief of Glencore’s West African oil trading desk, overseeing a boom of the commodity trading firm’s crude flows and an almost two-fold surge in bottom line to $200 million four years ago, Bloomberg said citing sources privy to internal data.

U.S. Justice Department prosecutors launched a bid in 2017 to confiscate properties approaching $145 million among which was a yacht of 215 feet named Galactica Star and valued at $80 million, a Billionaire Row’s apartment of $50 million in New York and houses in California, all said to be fruits of stolen wealth purchased for Mrs Alison-Madueke.

Allies of the flamboyant former minister, prosecutors said, started some companies just a while after Mrs Alison-Madueke took over position and got contracts to trade hefty oil allocations on global markets.

The cronies received several crude cargoes in the region of $1.5 billion, according to the prosecutors but Nigeria, globally known for the poverty paradox despite copious mineral wealth, got so little from the humongous proceeds of sale, which largely went to Mrs Alison-Madueke and her associates.

Prosecutors identified Glencore among the trading houses that bought the cargoes.

$272 million of that sum, enough to build almost six hospitals in each of Nigeria’s 774 local governments as of 2017, went into an account used for making purchases for Mrs Alison-Madueke.

Even though Mr Stimler started bribing in 2007, the kickbacks seem to have significantly risen when Mrs Alison-Madueke became minister, according to court documents.

In 2013, he consented to pay over 300 per cent more in the normal fees to an intermediary firm acting as a conduit of bribes for favourable grades and loading dates of Nigerian oil, according to his guilty plea.

Mrs Stimler and a colleague, three months later, paid another half a million dollars to make them eligible for further Nigerian cargoes.

Police arrest man for allegedly molesting two-year-old
Prosecutors said he “requested and received approval” for a Glencore unit to make the payment, although without disclosure of who gave the nod.

Later that year, he got a request saying Foreign Official 1 (said to be Alison-Madueke) wanted $300,000 every month from NNPC’s customers in connection for a forthcoming election. Prosecutors said Mrs Stimler endorsed the payment.

Dealing With My Staff Is The Best Weight Loss Pill - Kiki Os...