Man narrates the approach taken against a lady who refused to sleep on the same bed with him after paying for her flight and hotel for one week vacation.

Man narrates encounter with lady who refused to sleep on same bed with him after paying her flight, hotel

According to a Twitter user identified as @MullahCo, the lady stayed clear of him after landing at the location of their vacation despite their intentions for being on the trip.

Read his narration below …

“Took someone’s daughter for 1 week vacation. Flight and hotel paid. The cow has refused to sleep in my bed. Allowed her to sleep in the kids bed.

She already called her friends telling them she will be back after a week. Moved up her return ticket to tomorrow 4PM. She leaves the hotel at 9AM for a 4PM flight.

Sent the new ticket to her WhatsApp. Delilah is now in my bed.  She’s trying everything to change my mind. Behind me Satan. You go home tomorrow!

I am not touching her. I’ll be damned if I touch her. I think I’ll take the kids bed.

Update: she left. She complained about me not consulting her before moving up her flight. As a gentleman, gave her some cash for Uber for when she lands. Jezebel still had the audacity to ask for more money. No thanks for the treat. Took back the Uber cash.

Didn’t touch her. Many cute looking female solo travellers here living on their bill. Got two Beyonce-like mzungus already during breakfast. I think leo katatamba. We are already talking about covering 20 countries together in the next few weeks.

Done with giving daughters of Jezebel a taste of the soft life. Shameless serpent called saying she’s walked around the airport and saw cute stuff and wants me to buy her.

Blocked the motherphyuker! Nicknamed her Pest Delilah on Truecaller. Never pick a call from Pest Delilah.” 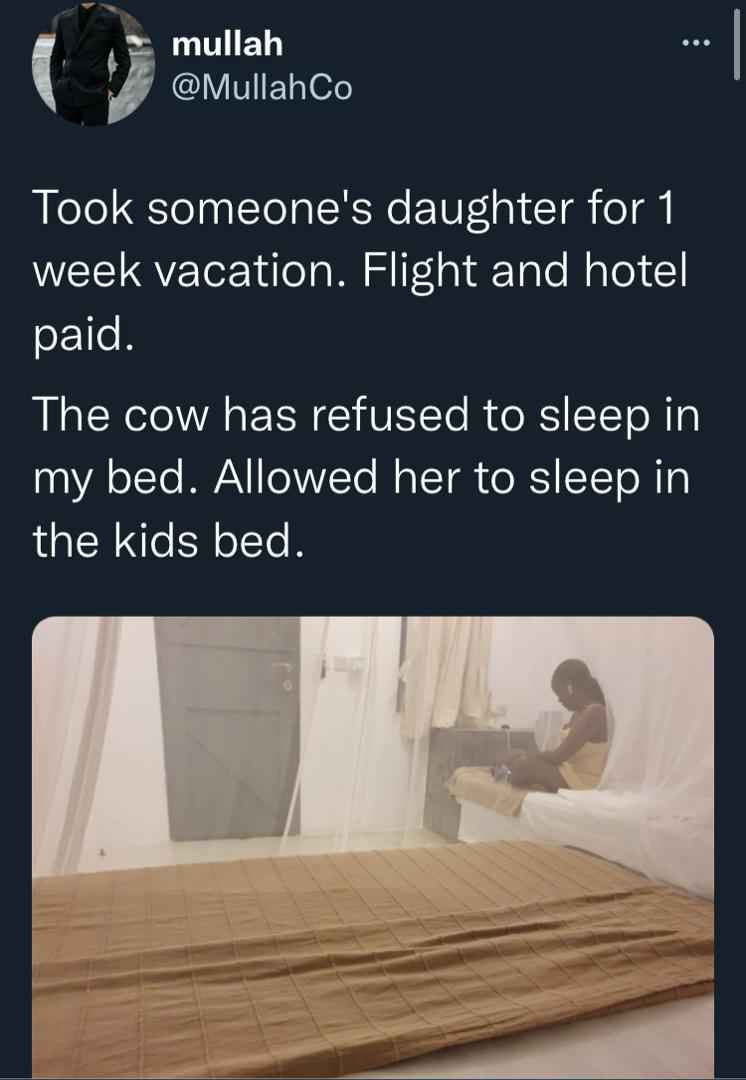 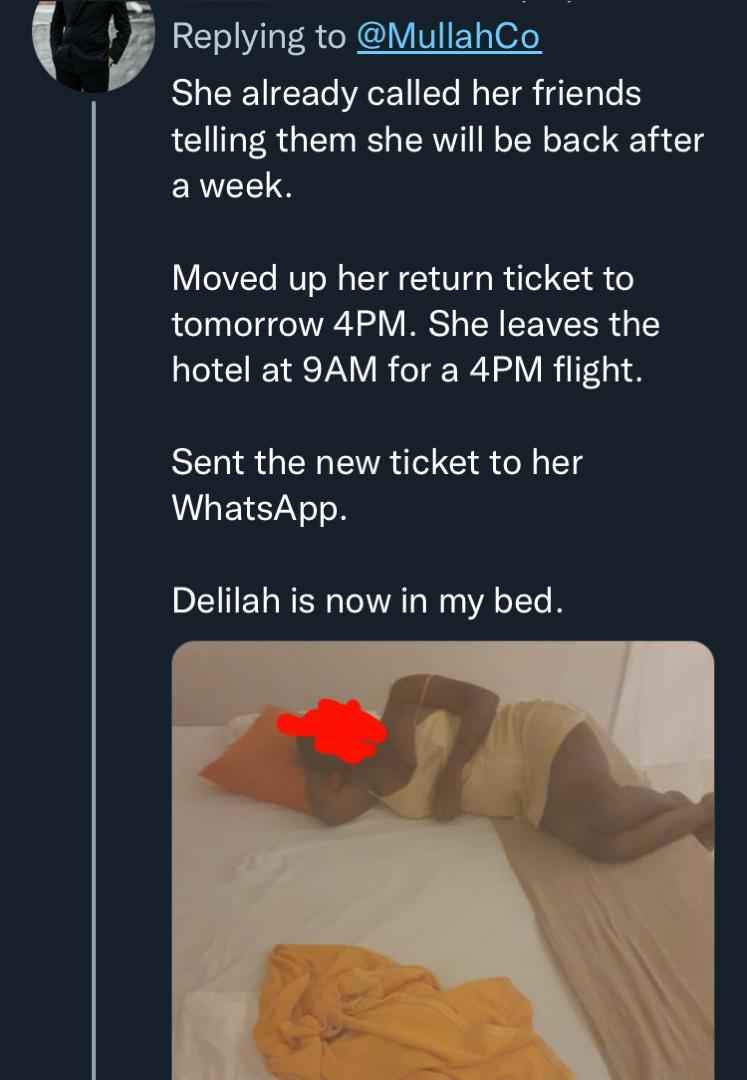 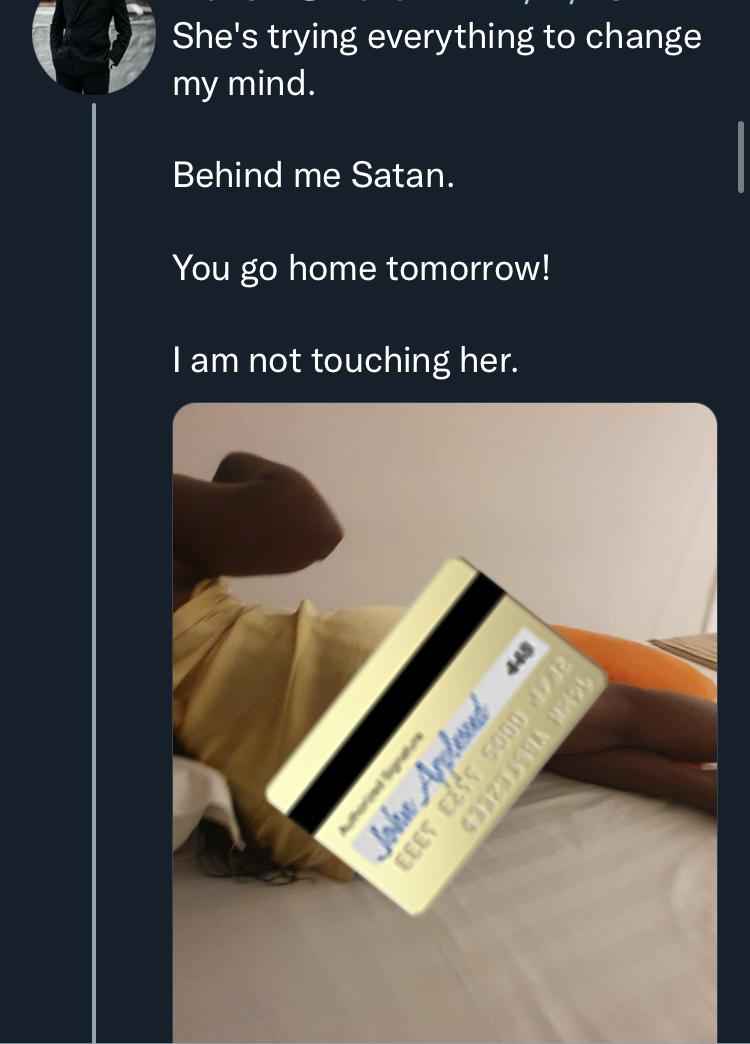 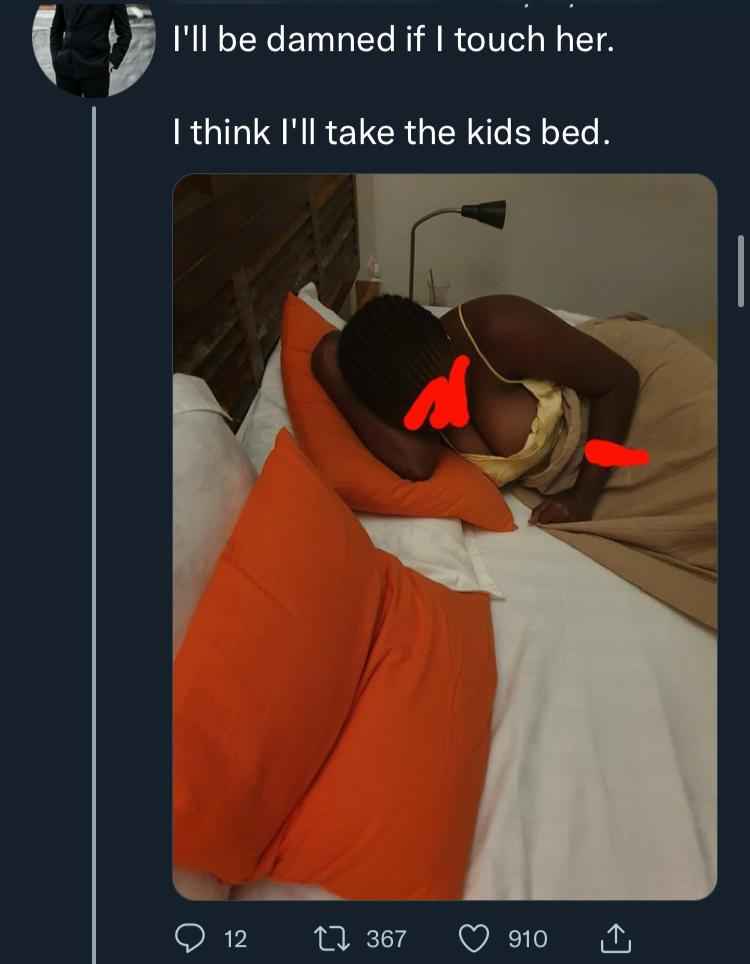 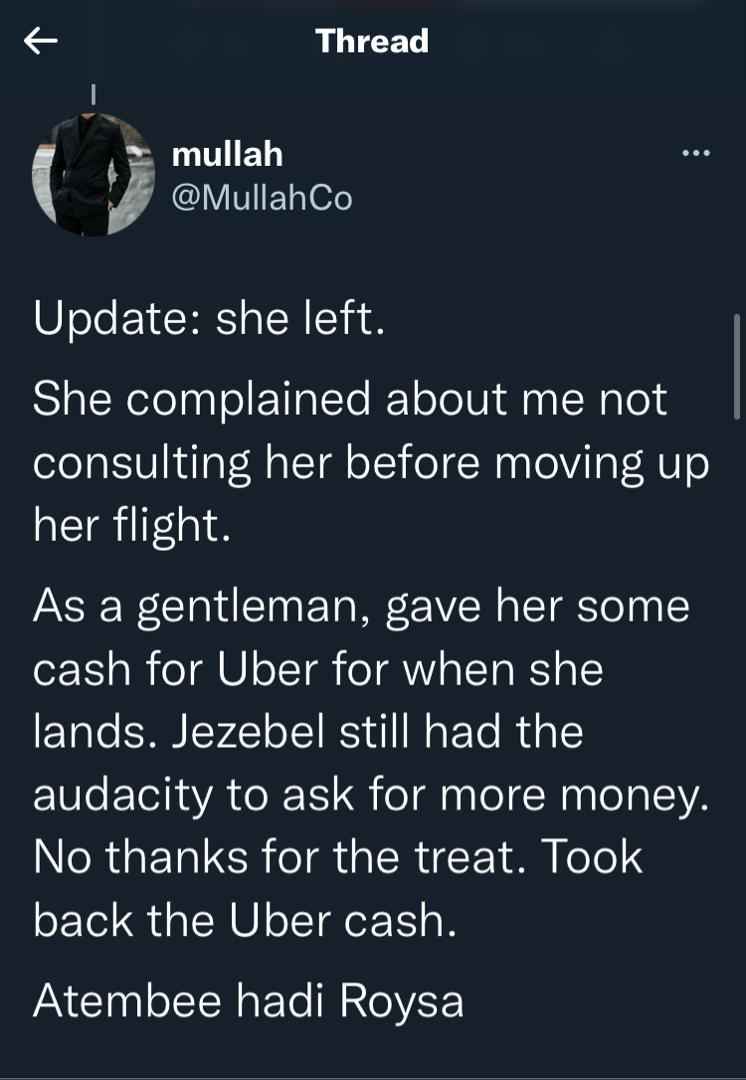 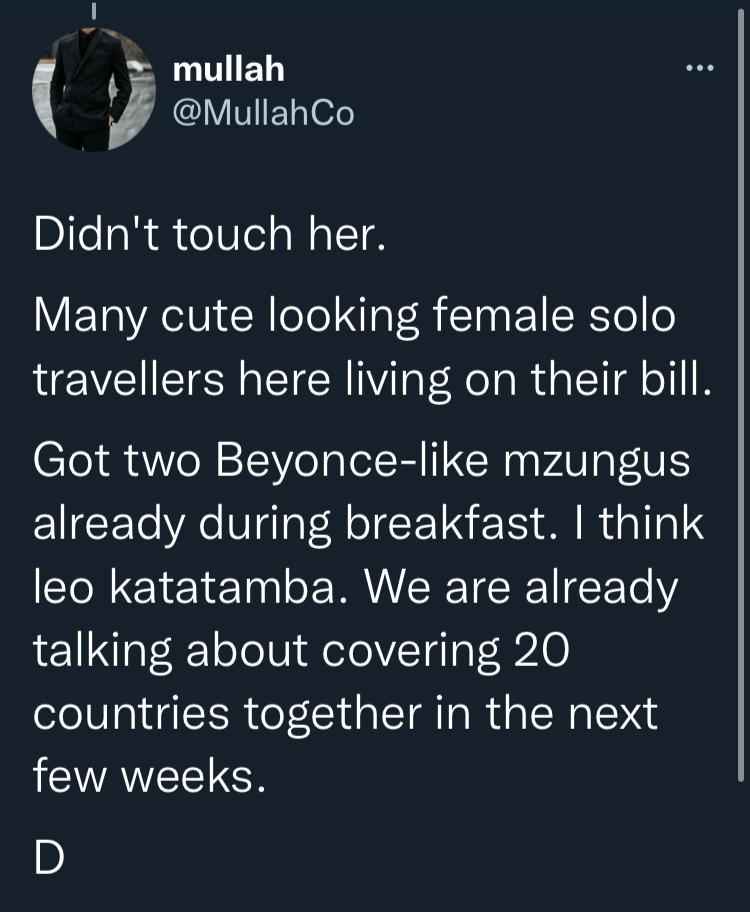 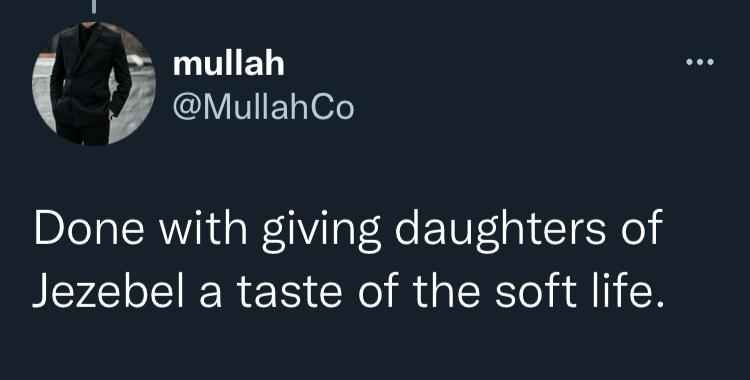 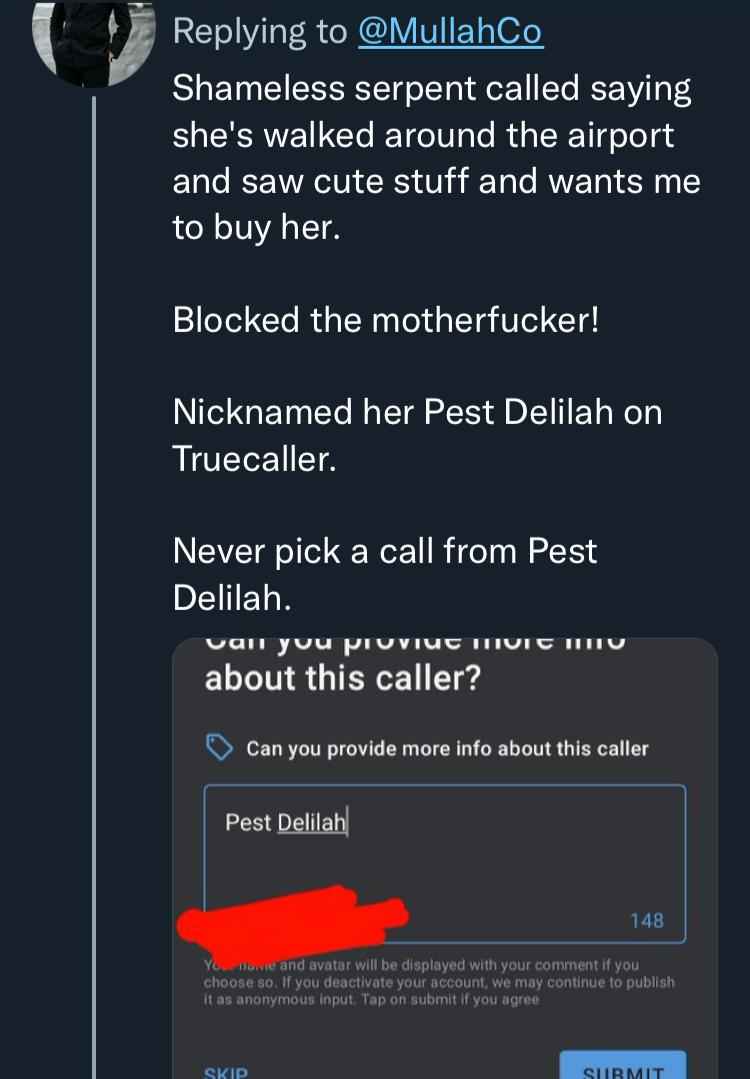 Fans React As Actor, Chinedu Ikedieze Shows Off His Son For ...

Please Request For a Refund – Tacha Taunts Ladies with ‘Oven...

12-year-old Boy Commits Suicide After Bullies Told Him He Wo...