Liverpool
Jurgen Klopp has a fresh injury hampering his preparations ahead of the visit of AC Milan. On Wednesday, the Liverpool manager will likely be bereft of the services of four first-team players, with Harvey Elliott the latest on the sidelines.

The teenage prodigy sustained a big ankle injury against Leeds United this past weekend and is out for the foreseeable future. Another key player missing for Liverpool is Roberto Firmino, who is recovering from a hamstring injury, while Neco Williams (foot) and Takumi Minamino (thigh) are both major doubts.

Klopp is unlikely to make many big chances to the starting lineup against Milan considering how tricky an opponents the visitors are. Alisson Becker will, therefore, keep his place in goal, with the Reds likely to line up in their customary 4-3-3 formation.

At the heart of the Liverpool defence, the formidable partnership of Joel Matip and Virgil van Dijk ought to continue, with the marauding duo of Trent Alexander-Arnold and Andrew Robertson being the two full-backs, who will have a lot riding on them in the final third.

The first and only change to the side will come in midfield, with Jordan Henderson replacing the injured Elliott. Thiago Alcantara and Fabinho will be the two other midfielders, with the latter keeping things tight in the middle of the park while Thiago will be in-charge of distributing the ball efficiently.

Finally, in the attacking unit, there is no looking past Mohamed Salah, Sadio Mane and Diogo Jota retaining their spots upfront, especially in the absence of Firmino. The trio will once again form a fluid attacking partnership, which ought to create at least one goal. 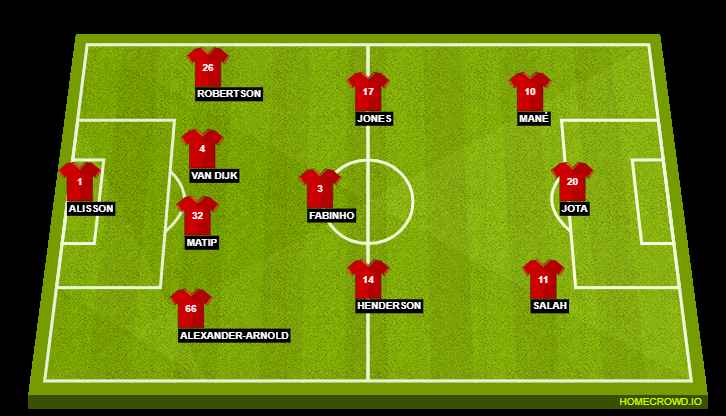 AC Milan
Like his counterpart in the Liverpool dugout, Stefano Pioli has a key player missing owing to an injury. On Wednesday, the AC Milan manager will have to make do without three first-team players.

The major absentee for AC Milan is Zlatan Ibrahimovic, who is unavailable due to an Achilles injury. Apart from Ibrahimovic, Tiemoue Bakayoko (ankle) and Rade Krunich (muscle injury) are on the sidelines as well and only likely to return to action sometime next month.
Like Jurgen Klopp, Pioli has his preferred formation which he rarely sways away from. So, Mike Maignan will take his place between the sticks against Liverpool, with AC Milan lining up in their usual 4-2-3-1 formation in front of him.

Alessio Romagnoli impressed last time out against Lazio and might have done enough to keep hold of his spot at the heart of Milan’s defence, with Fikayo Tomori likely to be his partner. Out wide, Davide Calabria and Theo Hernandez pick themselves, with the two full-backs providing a major outlet on the flanks.

Up ahead in midfield, Franck Kessie remains a key player despite his troublesome contract situation. The Ivorian will likely have Sandro Tonali has partner in the double pivot, with the duo providing a tenacious presence in the middle of the park for Milan.

The choice of the central striker will be an interesting one, with Olivier Giroud vying with Ante Rebic to lead the line for Milan against Liverpool. Rebic could get the nod upfront, with Giroud being a game-changing option off the bench. As for the support cast in attack, Brahim Diaz will play off of Rebic, with Rafael Leao and Alessandro Florenzi being the two wide men. 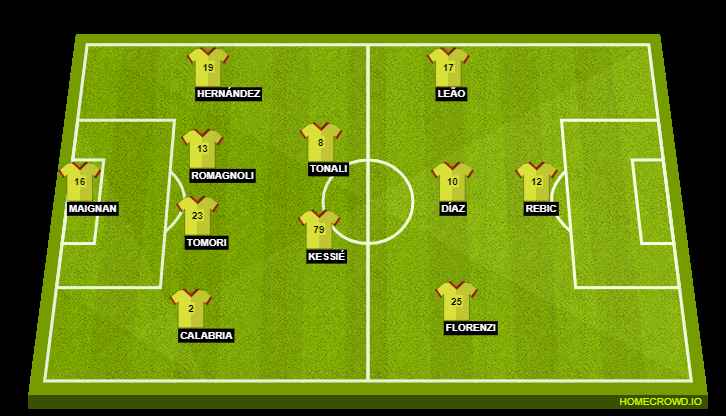 Key Stats
Liverpool and AC Milan have only met on two previous occasions in European competition, with both of them coming in the final of the UEFA Champions League. The Reds won 3-2 on penalties in 2005, before losing 1-2 in normal time in 2007.
After winning six of their first seven home games against Italian sides in European competition (L1), Liverpool have gone winless in the most recent two – drawing 1-1 with Napoli in 2019/20 and losing 0-2 to Atalanta in 2020/21, in the last two campaigns.
AC Milan have only won one of their last 13 games against English opponents in European competition (D4 L8), with that lone victory coming against Arsenal in this competition in February 2012 (4-0). Interestingly, all but one of the 13 games in this run have come at the Round of 16 stage, either in the UEFA Champions League or UEFA Europa League.
Since the start of the 2017/18 season, only two teams have won more games than Liverpool (25) in the UEFA Champions League – Bayern Munich (31) and Manchester City (30). Indeed, they are also the only two teams who have scored more goals than Liverpool (95) in the same period (Bayern 112, City 96).
AC Milan have only won two of their last eight games in European competition (D4 L2), all of which came in the UEFA Europa League last season. This will be their first game in the UEFA Champions League since March 2014, when they were eliminated by Atletico de Madrid over two legs in the Round of 16.